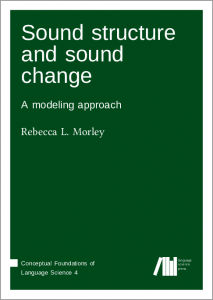 We’re happy to present the latest publication in our series: Sound structure and sound change: A modeling approach, by Rebecca L. Morley. Like all Language Science Press books it is openly available in a range of formats. Here is a synopsis of the book:

Research in linguistics, as in most other scientific domains, is usually approached in a modular way – narrowing the domain of inquiry in order to allow for increased depth of study. This is necessary and productive for a topic as wide-ranging and complex as human language. However, precisely because language is a complex system, tied to perception, learning, memory, and social organization, the assumption of modularity can also be an obstacle to understanding language at a deeper level. This book examines the consequences of enforcing non-modularity along two dimensions: the temporal, and the cognitive. Along the temporal dimension, synchronic and diachronic domains are linked by the requirement that sound changes must lead to viable, stable language states. Along the cognitive dimension, sound change and variation are linked to speech perception and production by requiring non-trivial transformations between acoustic and articulatory representations.

The methodological focus of this work is on computational modeling. By formalising and implementing theoretical accounts, modeling can expose theoretical gaps and covert assumptions. To do so, it is necessary to formally assess the functional equivalence of specific implementational choices, as well as their mapping to theoretical structures. This book applies this analytic approach to a series of implemented models of sound change. As theoretical inconsistencies are discovered, possible solutions are proposed, incrementally constructing a set of sufficient properties for a working model. Because internal theoretical consistency is enforced, this model corresponds to an explanatorily adequate theory. And because explicit links between modules are required, this is a theory, not only of sound change, but of many aspects of phonological competence.

The book highlights two aspects of modeling work that receive relatively little attention: the formal mapping from model to theory, and the scalability of demonstration models. Focusing on these aspects of modeling makes it clear that any theory of sound change in the specific is impossible without a more general theory of language: of the relationship between perception and production, the relationship between phonetics and phonology, the learning of linguistic units, and the nature of underlying representations. Theories of sound change that do not explicitly address these aspects of language are making tacit, untested assumptions about their properties. Addressing so many aspects of language may seem to complicate the linguist’s task. However, as this book shows, it actually helps impose boundary conditions of ecological validity that reduce the theoretical search space. The book focuses on explaining cross-linguistic generalizations, and particularly the role of functional motivation in relation to diachronic sources. It includes contributions by a diverse and distinguished roster of authors. Here’s the editors’ summary:

This volume provides an up-to-date discussion of a foundational issue that has recently taken centre stage in linguistic typology and which is relevant to the language sciences more generally: To what extent can cross-linguistic generalizations, i.e. statistical universals of linguistic structure, be explained by the diachronic sources of these structures? Everyone agrees that typological distributions are the result of complex histories, as “languages evolve into the variation states to which synchronic universals pertain” (Hawkins 1988). However, an increasingly popular line of argumentation holds that many, perhaps most, typological regularities are long-term reflections of their diachronic sources, rather than being ‘target-driven’ by overarching functional-adaptive motivations. On this view, recurrent pathways of reanalysis and grammaticalization can lead to uniform synchronic results, obviating the need to postulate global forces like ambiguity avoidance, processing efficiency or iconicity, especially if there is no evidence for such motivations in the genesis of the respective constructions. On the other hand, the recent typological literature is equally ripe with talk of “complex adaptive systems”, “attractor states” and “cross-linguistic convergence”. One may wonder, therefore, how much room is left for traditional functional-adaptive forces and how exactly they influence the diachronic trajectories that shape universal distributions. The papers in the present volume are intended to provide an accessible introduction to this debate. Covering theoretical, methodological and empirical facets of the issue at hand, they represent current ways of thinking about the role of diachronic sources in explaining grammatical universals, articulated by seasoned and budding linguists alike. The book implements these insights in a variant of Lexical Functional Grammar, augmented by tools for phrasal constructions derived from Construction Grammar. It offers a new formalization that may provide solutions to longstanding problems not available in other formalizations.

Read the summary of the book or download it directly from the Language Science Press catalog.

We are proud to present the first book in our open access series Conceptual Foundations of Language Science: Natural causes of language by N. J. Enfield. 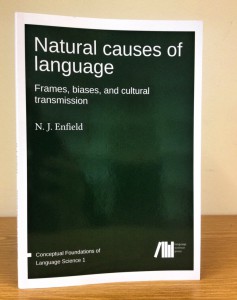 What causes a language to be the way it is? Some features are universal, some are inherited, others are borrowed, and yet others are internally innovated. But no matter where a bit of language is from, it will only exist if it has been diffused and kept in circulation through social interaction in the history of a community. This book makes the case that a proper understanding of the ontology of language systems has to be grounded in the causal mechanisms by which linguistic items are socially transmitted, in communicative contexts. A biased transmission model provides a basis for understanding why certain things and not others are likely to develop, spread, and stick in languages.

Because bits of language are always parts of systems, we also need to show how it is that items of knowledge and behavior become structured wholes. The book argues that to achieve this, we need to see how causal processes apply in multiple frames or ‘time scales’ simultaneously, and we need to understand and address each and all of these frames in our work on language. This forces us to confront implications that are not always comfortable: for example, that ‘a language’ is not a real thing but a convenient fiction, that language-internal and language-external processes have a lot in common, and that tree diagrams are poor conceptual tools for understanding the history of languages. By exploring avenues for clear solutions to these problems, this book suggests a conceptual framework for ultimately explaining, in causal terms, what languages are like and why they are like that.

N. J. Enfield is Professor of Linguistics at the University of Sydney, and a senior staff scientist at the Max Planck Institute, Nijmegen. He has carried out extensive field work in mainland Southeast Asia, especially Laos, working on language, culture, cognition, and social interaction. His books include Ethnosyntax (OUP 2002), Linguistic Epidemiology (Routledge 2003), A Grammar of Lao (Mouton de Gruyter 2007), The Anatomy of Meaning (CUP 2009), Dynamics of Human Diversity (Pacific Linguistics 2011), Relationship Thinking (OUP 2013), The Cambridge Handbook of Linguistic Anthropology (with P Kockelman and J Sidnell, 2014), Languages of Mainland Southeast Asia (with B Comrie, Mouton 2015) and The Utility of Meaning (OUP 2015). He has published over 100 academic articles and reviews.

Conceptual Foundations of Language Science publishes short and accessible books on foundational issues in linguistics. The series provides a venue for conceptual arguments and explorations that do not require the traditional book-length treatment, yet that demand more space than a typical journal article allows. CFLS is one of about twelve series published by the innovative open access publisher Language Science Press. Books published by Language Science Press are peer-reviewed, ensuring high scholarly standards; and they are open access, ensuring universal availability.

Natural Causes of Language can be downloaded for free from the Language Science Press website. If you prefer a printed copy you can order it through  Amazon.